The mighty Svartpilen has been returned to Husqvarna. There is a bike shaped hole in my heart and too much space in my garage, I’m also missing out on a lot of winter fun – the R1 is great, but it definitely lacks some capabilities.

In the recent months since my last blog post the Svartpilen 401 has done two off-road days. I say days, but what actually happened was all the lanes had been saturated by the non stop rain we’ve had since the end of August, and everything was slippery, so the ‘days’ turned into me riding until I lost my bottle then running back to dry land. To be perfectly fair to the bike, it was doing a great job! I haven’t ridden a bike successfully through soaked mud before and nobody told me how to do it so I was working out a method. Power seemed to be the way forward, my usual tactic of slamming my brakes on and stopping to look at an obstacle was causing problems, so instead we just powered through the puddles and over the tree roots, letting the tyres (Pirelli STRs come standard on the Svartpilen 401) do their thing. On one of these days, I’d just got my rhythm when we hit a brick buried in the mud followed by a particularly slippery bit of ground. I guess the tyres didn’t recover from the first slide before having to deal with the next, I was probably doing the wrong thing, and we were going too quickly for me to apply my old stop and think tactic; The bike went down, quite spectacularly I’d like to think, in a 180 degree spin off the back wheel and landed gently in some undergrowth. Agile like a cat because no one was around to witness this, I landed gracefully on my feet. The bike was picked up, examined, and started again as if nothing happened. We continued down the lane (VERY slowly this time) and found a nice dry, flat, gravel lane to try after that, then we went to get some tea. My awful riding aside, the little Husqvarna does very well off road for a road bike. It didn’t get stuck on anything it had the ground clearance for, powered over all the obstacles and mostly stopped when I needed it to (wet mud doesn’t count). What I learned from riding this off road has translated well to my road riding in time for winter, and my confidence riding in the wet and on gravel etc has massively improved. So if you’re nervous of bad riding conditions and you’re thinking about getting a Svartpilen – do it, and force yourself down some greenlanes.

Another challenge I put the bike through was, as promised, a camping trip. I’m not counting it as a proper challenge – my friend joined me and she came in her car so after establishing that I could easily pack the Svartpilen with a tent and a sleeping bag and a bunch of cooking equipment if I wanted to, we put everything in her car. The camp was a great success, riding the Svartpilen through the New Forest was a lovely experience, we didn’t get stuck in a cattle grid, neither of us got eaten by wildlife and we got some pretty almost-autumn photos. I planned many more camping trips after this one, but sadly the following weekend it started raining, didn’t stop and I’m just not on that level of out-doors-y yet.

I focus a lot on the Svartpilens off-road capabilities, we did of course ride on a lot of actual roads. A lot of the promo photos for the bike feature it zipping through cities, but I have absolutely no need (or want) to go into Portsmouth and get stuck filtering through traffic. When I first rode a 401 it was in Bristol when Bristol was mostly just road works and misery, so I can confirm that the bike is good in cities – made weaving through traffic fun even. Most of what we did on tarmac was fast country roads and tiny country lanes. We explored tiny winding hazardous back roads through woodland and deserted farmland, discovered tiny villages, farms, and creepy churches that I didn’t know existed and then had the fun challenge of getting home again. I had a few opportunities to see how good the little Svartpilen is at keeping up with strangers on bigger bikes. The report is good, we were in the middle of a BMW ride out that I joined for a bit – sure, a big muscly BMW is going to out speed me, but about 4 of them didn’t so I’m counting it. Exact quotes from some guys behind me on bigger bikes include “You were quick on that thing” and “I was thinking I could overtake but you were going to quick”. 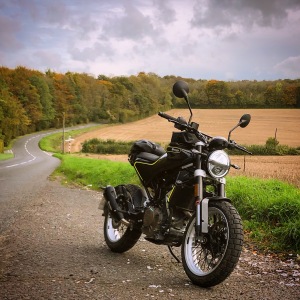 The Svartpilen is able to do over 100mph; it’ll be flashing at you like mad but it’ll do it, and it’ll flick round corners and in and out of traffic. It doesn’t get wobbly like some naked bikes do over 80mph, and if you need to sit on the motorway for any length of time it’ll do that, and be comfortable. I had plenty of confidence throwing the bike round corners on roads that I’d hang back on with the R1, simply because it’s just so light and easy to ride. The brakes are good and sharp, we got into some bad filtering habits because I knew it’d stop very quickly and pick up again immediately if I had to second guess or avoid something.

As an every day bike the Svartpilen would be ideal for a wide range of people – in my opinion. I’ve struggled this year with driving cars, and I would rather get cold and wet riding a bike. I’m working on the car thing, but the Svartpilen was a super alternative. It’s cheap to fuel, about £10 of fuel would last 200ish miles and the dash has a fuel gauge so you know what’s in there without having to muck around resetting trips. Although subjective, for me, the insurance was cheap. It’s light enough that you can pick up the back end and slide it round into tight corners so if you need to keep it in your hallway – no problem, and parking it in awkward places when out and about is nice and easy – it’s been wedged into lots of tight spots. The seat is fairly tall (835mm) so even though it appears small, it feels bigger and you can see over hedges. Despite being tall, it’s light – 150kg according to MCN, so the height isn’t so much of a problem, it’s easy to stop on one foot and the light weight makes it easy to get off and push if you need to, and if you feel like it’s starting to go over, you’re probably going to be a able to catch it. The engine is nice and quiet, but even with the standard exhaust it has a good growl when you accelerate, so it sounds cool, but you won’t fall out with your neighbours or give yourself a headache. 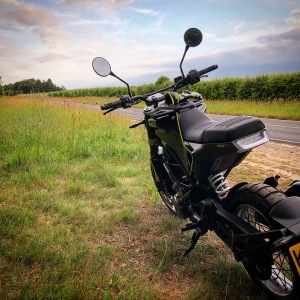 Everywhere I went people were fascinated with the Svartpilen, not many people had seen one before and most of these people didn’t know what it was. I’d expect people to be more interested in my bright pink R1, but no, people want to talk about the Svartpilen – what it’s for, how much it costs, if it’s ‘any good’ etc; the bike is a guaranteed conversation starter and everyone wants to sit on it.

Is it quick for daily riding?

Depends how quick you want to go, but for every day riding and commuting etc it’s quick, responsive and agile. You should have a lot of fun with it.

Is it suitable for long trips?

I think so, I didn’t find it underpowered on motorways and of course it’s enjoyable on small roads. Riding position is comfortable but it does lack a screen so I suppose in awful weather that might be a drawback, the standard seat is comfortable for a few hours, then maybe you might want to wedge a cushion in there, or get the upgraded seat available for the bike, and nothing on it vibrates or rattles.

Did you find it underpowered?

No, but it did take a bit of getting used to, once well acquainted we were overtaking everyone and basically business as usual. The challenge was getting the hang of its gears and knowing I couldn’t pin it in first and get the same results as the R1.

Is it big enough for someone over 2m?

I did hear someone tall say their knees hit the uh – sticky outy bits on the tank, so I guess just look out for that. None of my tall friends had any issues sitting on it, nor did it look ‘too small’ for anyone.

There is a lowering kit available for the bike.

How is it different from the Vitpilen 401?

It’s way cooler. The bikes have the same engine, frame and body work. The Vitpilen has clip ons and is a much lower riding position, it has a cafe racer styled seat and road tyres. The Svartpilen has upright bars, comes with a bash plate and multi terrain tyres. The Svartpilen has a tank rack for a mounted tank bag, and removable back seat which can be switched out a luggage rack. It does look like in the 2020 update they’ve put a belly pan on the Vitpilen. I’m gonna suggest that the Vitpilen is for style and the Svartpilen in for function – could be wrong but that’s my view.