On Thursday me and my bike had our first track day. I was lucky enough to get onto Performance Bikes Magazine and Dunlops free track day at Rockingham speedway. I’ve wanted to try the R1 on track since I bought it, I did one track day on my R6 at Donnington, but haven’t been able to do one since. I was extremely excited to learn that I had one less than two weeks away once I received the email. 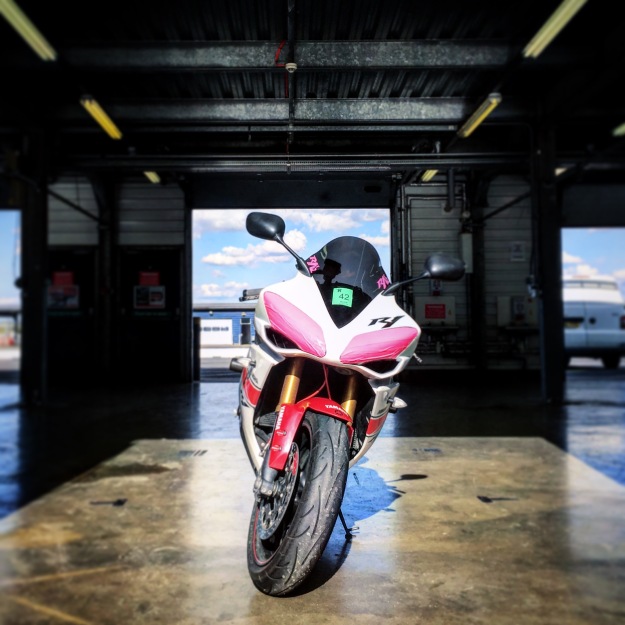 Rockingham is 150 miles away from home, the weather was a bit sketchy but I packed light with the bare essentials (pink duct tape, baffles, spare socks and a phone charger) and set off at 4am. It was dry-ish when I left but there was a huge wall of thick fog just before the A34 and on the other side was rain. I arrived soggy.

For what I assumed was a random selection of Performance Bikes readers, the majority of people who’d arrived at Rockingham had dauntingly professional looking set ups. My preparation was putting pink tape over my headlights, replacing my mirrors with a bolt and washer and hiding my number plate in my backpack. Most people there looked like they lived for trackways with their vans backing onto the garage, bikes on paddock stands with tyre warmers already on, piles of tool boxes, drinks coolers and leathers hanging from the ceiling. Everyone in the garages was so helpful and friendly I was able to get help and tools to do what I needed to do then wander round and drool over the other bikes.

After a short briefing each group went out to do a few sighting laps. The track was still wet but it had stopped raining and the forecast looked good. Approaching the first hairpin (more like two left 90 degree bends right next to each other but close enough for there to just be the one apex) I changed down a gear and my rear tyre had a tantrum and did a little warning skid. So I made the safe decision to miss my first full session and wait for the track to dry.

Dunlop were absolutely amazing, without them I probably wouldn’t have survived the day. They made me lots of cups of tea (silly me didn’t bring cash for the refreshment truck), let me loiter in their truck to warm up while I was still soggy, and they gave me tyre advice.

When the track dried up I went out for my first session. I was embarrassingly slow but at least I wasn’t worrying about falling off. I didn’t get it out of first gear on most laps that session; the straights were short and the corners were quite sharp. I got lapped by a few people which was a bit heartbreaking, but I was going VERY slowly.

Several people gave me my first piece of critical advice – I need to stop worrying about other people on the track. I had removed my mirrors but I was shoulder checking, making sure no one was going to undertake me at the last second before a corner. The worst thing would be to crash and not be able to get home. Apparently if someone coming from behind hits you, your back tyre has more grip then their front, and they will come off but you are more likely to be ok. With this encouragement I went to my next session with more confidence.

At this point I wanted to learn a few corners at least so even if half the track was done at my snail pace I could focus on a two or three corners and get them right. The first little chicane, the long left hander and the last corner coming out of the tight S bend became my favourites. I was a lot happier after my second session, then it was time for lunch. 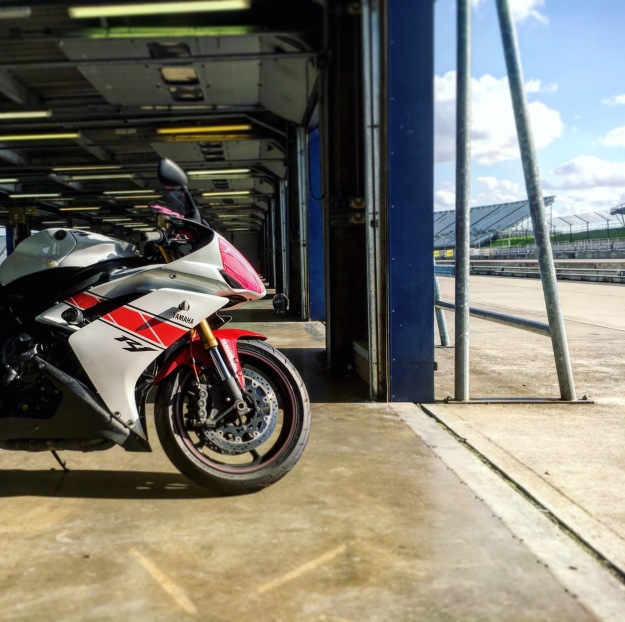 After lunch (salad and a hot chocolate from the cafeteria) I asked for help on track from a Performance Bikes rider, I wanted to learn what lines to take because I’d been too busy not falling off on the sighting lap to remember them. John McAvoy followed me for a few laps then overtook for me to follow him then followed me for the last lap. I learned that there are exit apex’s as well as corner apex’s, which I hadn’t been using up until then, so I’d been taking corners far too tightly. The final corner I’d been doing completely wrong and the new line meant I could go into it much faster and get a higher top speed sooner, and I’d hit the first corner faster. I’d also been a massive wimp with my brakes and throttle and forced myself to brake later and throttle on sooner and harder. I could feel the bike starting to work, confidence on my brakes has always been an issue for me that I try to work on regularly, but I was learning to trust them. The bike has no electronics, if you screw up there’s no abs or traction control to save you; I love that about it, it means I can’t be lazy and rely on anything, but it doesn’t mean it sucks, it won’t spit you off if you make a mistake.

After this I had two sessions to enjoy. They were MUCH better. People were recognising me on track, I was getting little thumbs up when I got overtaken (still getting overtaken but a thumbs up softens the blow), I wasn’t worried about being rear ended, and I was able to improve all the corners, even the first hair pin I was able to throw the bike into rather than wobble round cautiously, and I was really enjoying myself.

The ride home would have been nice, the weather had been beautiful once the morning rain dried out. I got to the M40 (about 60 miles from the track) and the skys opened and I got drenched again, and it wasn’t until gone 8pm that I got home, absolutely knackered, had a bubble bath and went straight to bed.

My tyres now have bubbles all over them, a tiny victory for me, I have never had tyre bubbles before and I’m very proud of them. I’ve met some wonderful people, I am so grateful for everyone who let me borrow their tools and helped me with my bike, for the people who made me cups of tea and gave me encouragement and advice. Everyone was so friendly and chatty, I went by myself, but there was no point during the day that I didn’t have someone to talk to. I’m also extremely thankful to Performance Bikes and Dunlop for the track day, I know I have to do more now, thank you. 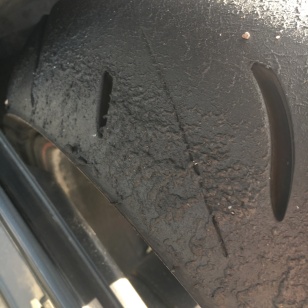 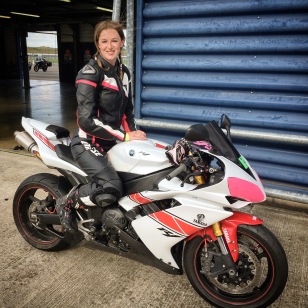